Election Day Special: Sharing a Picture of Your Ballot Asking for Trouble

I hope everyone reading this has already voted, but if you’re on your way to the polls later, be sure not to succumb to the temptation to post a picture of your ballot to your Facebook, Twitter, Instagram or other social media.  While many people are excited to share their patriotic fervor this election day, there are plenty of ways to do it that won’t possibly result in getting you kicked out of the poll, or worse! 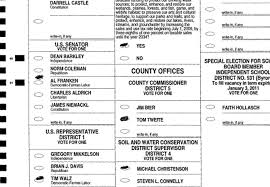 For those of you in Minnesota, the law prohibits you from showing your ballot to anyone else in the polling place.  It’s the same as wearing a campaign button or talking loudly about who you want to vote for, all of which would violate Minn. Stat. section 204c.17, the restriction on campaigning within a certain distance of a poll.  Although the Secretary of State for Minnesota, Mark Ritchie, has not come out directly, a tweet from MPR reporter @CatRichert indicated that the SOS frowned on the practice.  Also a spokesman for the SOS, Patricia Turgeon, told a local news channel that the Minnesota Secretary of State, “strongly discourages” voters from using cameras or video recorders in the polling place.  She went on to say, “voters have a right to privacy-both as to how an individual has voted as well as whether or not an individual has voted… Either or both of these could be compromised by pictures or video. In addition, other voters’ objections to being photographed could lead to disruptions within the polling place.”  So, even though there’s no specific prohibition, it’s still not a good idea to whip out your phone and start snapping away.  Just stick with pictures of your “I voted” sticker and do it outside the voting area.

Citizens of other states should be even more cautious, however, because some state laws are much more strict.  All Things D reports that Wisconsin law (Wisc. Stat. § 12.13(1)(f))considers sharing your ballot (or images of it) with others to be election fraud, a Class I felony!  If you want to check out what the laws are in your state, the Citizen Media Law Foundation has this chart that highlights laws regarding photography in polling places by state.

Ok, now get out there and vote!

Many celebrities, including Beyonce and Fox News icon, Sean Hannity may have broken election laws by tweeting pictures of their completed ballots.  Will keep following the story to see how state prosecutors respond.

An attorney in the Twin Cities and adjunct professor at William Mitchell College of Law where I teach a seminar on the law of virtual worlds.
View all posts by Justin Kwong →
This entry was posted in Mobile Devices, Social Networks and tagged current-events, Facebook, freedom, mark ritchie, minnesota secretary of state, politics, social networks, Twitter. Bookmark the permalink.